You really have to soak in the big moments in your life as they happen. As human beings facing an inevitable death, our goal is to live a life so fulfilling and so adventurous that eventually, we no longer fear its end. And last night I certainly took a big step. In front of a packed crowd at Irving Plaza in NYC, I got to get up onstage and play with my hero, Jamey Jasta from Hatebreed. 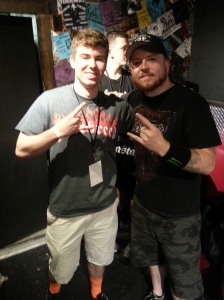 When it was announced that Jamey was offering a VIP option to jam onstage with his solo band during the summer tour with Fear Factory and Coal Chamber, it was one of those moments for me where fantasy and self-confidence intersect: fuck it, why NOT me?

After relentlessly nagging him via Gmail with a list of songs that I’d be down to play, Jamey finally came back with: “come up and do fearless! That’ll rock!” Whew, holy shit. This is really happening, isn’t it? Sixteen days and counting. Time to tune my guitar down, figure the song out, and play it ‘til I’m so fucking bored of it that I could play it perfectly while tripping acid and hanging upside down from a tire swing. (The track in question is “The Fearless Must Endure” featuring Zakk Wylde on guest guitar, off of the Jasta solo record).

It’s incredible how fast sixteen days can whizz by you with anything performance-related on the horizon. It was August 11th and I was feeling that beautiful blend of nerves and through-the-roof excitement that any musician has a phD in.

Three hours before Jasta’s set time, I met with Pat, the band’s lead guitarist, and we played through all the parts in an upstairs dressing room inside the venue. Right away, this was very quickly transitioning from nerve-wracking to just plain awesome. Pat (Seymour, also the lead guitarist for CT underground favorites Eyes of the Dead) revealed to me some of the completely badass changes the band makes to the live arrangement (I won’t speak guitar nerd here), and was totally cool with me playing two of the song’s solos. We talked Marty Friedman, Jeff Loomis, Oli Herbert, diminished arpeggios, and every built-up guitar nerd outburst I desperately try to repress while hitting on women. Given the fact that I attend a preppy catholic college where I have yet to see a piece of black clothing, talking guitar with Pat was akin to an immigrant finally interacting with someone from their native country.

Before Jasta’s set, I met Jamey backstage at the meet-and-greet in Fear Factory’s dressing room, and stayed back there with the band through all the setting up, warming up, and casual socializing. Just surreal for me. I simply stayed out of the way and grasped at any sensation I could hold onto and stow away into my brain.

Aside from an anxious paranoia about my guitar being in tune (shout out to the Fear Factory guys for being so understanding), I was beyond psyched as I watched Jasta tear through the first four songs of their set from the side of the stage. Sure enough, fifth song in the set, Jamey calls my name. And my God did the nerves disappear fast. What I remember is a lot of headbanging, flashing stage lights, and exchanging smiles with all the band members as we ripped through the song. As I unplugged my guitar, Jamey told me I would’ve made Zakk Wylde proud – the biggest compliment I have ever received. The fact that it came from my idol didn’t hurt, either.

Ironically though, the most surreal part of the whole experience came the morning after. I convinced my poor mother to come to the show and sit through Jasta’s set in the hopes of maybe capturing my time on stage on photo or video. In my email inbox the next day was a 10-second video in which I’m shredding the second solo, and Jamey points at me and goes, “that’s a badass motherfucker!” Anyone who has ever idolized someone can imagine what it felt like to see that. Watching the footage, I realized I had just created one of those rare memories – the ones that trigger an automatic, instinctive smile every single time your mind ventures back to it.

If you have an opportunity to create an unforgettable memory, don’t even blink. Grab it by the throat, and most importantly, cast aside every negative emotion you have ever felt and be completely present for it. It might be the most important lesson I’ve ever learned. Every corny, played-out “carpe diem”-related cliché applies here, in spades. When you live a moment that triggers that overwhelming rush of gratitude for being alive on planet Earth, it feels like you are hearing every one of those clichés for the first time.

Thank you so much to Jamey Jasta, the rest of the band, and the Fear Factory and Coal Chamber guys for being so accommodating and so cool to me, especially with me invading the cramped dressing room! I hope reading about my experience playing with Jasta inspires someone else to create their own special, lifelong memory.